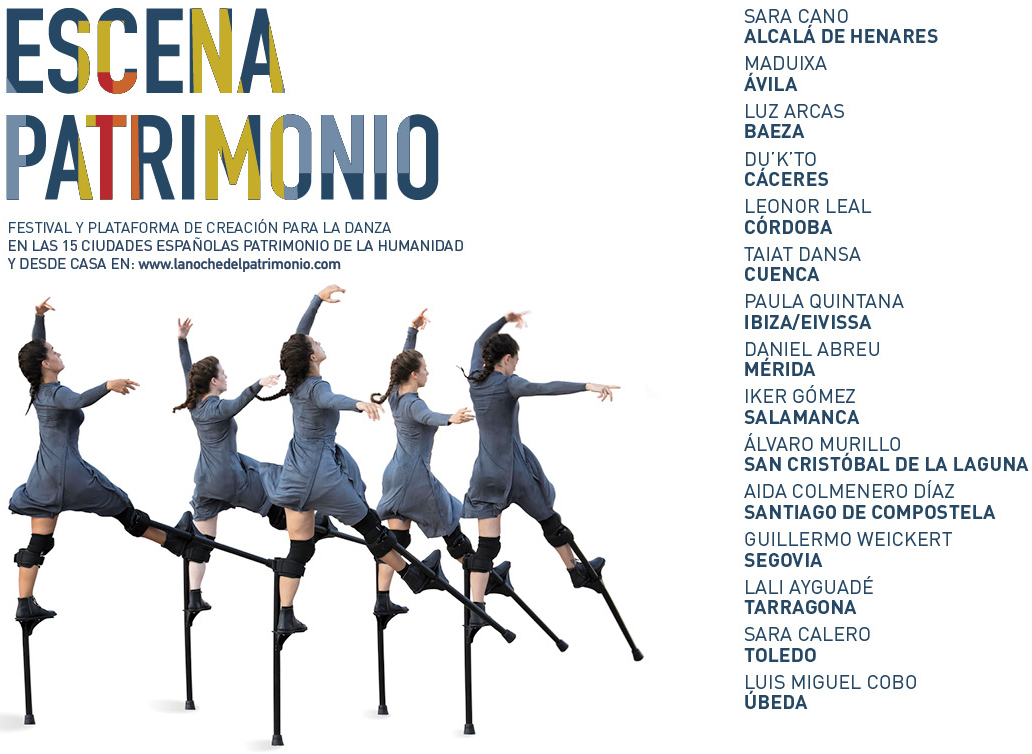 After the success of the two previous editions, once again the Spanish World Heritage Cities Group actively supports, through the ESCENA PATRIMONIO Festival, the artistic excellence, the contemporary creation and the living heritage of our Cities, presenting the best of Spanish choreography in all its forms and promoting the dissemination of Dance and collective participation for all ages.

Within the framework of the Heritage Night on Saturday September 12, Alcalá de Henares, Ávila, Baeza, Cáceres, Córdoba, Cuenca, Ibiza / Eivissa, Mérida, Salamanca, San Cristóbal de la Laguna, Santiago de Compostela, Segovia, Tarragona, Toledo and Úbeda will present simultaneously the 15 creations of the invited artists that will be broadcasted on streaming and will be accompanied by parallel activities related to dance such as workshops, presentations and talks and video-dance projections.

The selection of companies and spaces that make up this festival has been made by the Group’s Education, Culture and Sports Commission, under the artistic direction of Lorenzo Pappagallo, creating an exchange platform among UNESCO World Heritage, artistic languages ​​and different audiences.

In order to reactivate the cultural offer and support the creative industry of our communities after such uncertain and turbulent months, we wanted to draw a very diverse program that navigates between  contemporary dance and the signs of our intangible heritage, such as flamenco, danza española and folklore in its most cutting-edge and innovative aspects, daring also to hybridize with other disciplines such as circus, video creation and choreographic sound installation.

In order to comply with sanitary regulations and reach an even greater number of audiences, this year the 15 invited shows will be broadcasted live on the Night of September 12th through the website http://www.theheritagenight.com/

Thanks to the support of UNESCO and the various European World Heritage associations, the artistic programme will be promoted internationally.

While in the last edition we focused on themes such as age and memory, this year’s programming was forged under the slogan Women and children first!

The seafaring tradition indicates that when a ship is sinking, women and children always have priority to abandon the ship and save themselves, so in this edition that is born in the middle of a period of great emergency and fragility, we want the great protagonists be the creation of the feminine and childhood as a generator of hope and new horizons for artists, citizens and visitors to the Heritage Cities.

Reaffirming our mission to consolidate the festival as a platform for the presentation and creation of shows in heritage spaces, we want to offer the extraordinary opportunity to several well-known artists from the 9 autonomous communities represented in the Group (Andalusia, Balearic Islands, Canary Islands, Castilla y León , Castilla y La Mancha, Catalonia, Extremadura, Galicia, Madrid) to inhabit and dialogue with these great vestiges of the past and our present, to premiere pieces created expressly after periods of artistic residencies that will take place in various cities Heritage.

As a novelty this year thanks to the support of Casa Africa (AECID) and the curatorship of the Africa Moment International Meeting, we want to re-signify the lesser-known artistic heritage of our cities through dance, projecting the series of dance short films ELLA POEMA made by the Galician choreographer Aïda Colmenero Dïaz in collaboration with African female referents in the performing arts, thus giving a different look to the public space and an opportunity to discover the richness of the African contemporary creation.

Emphasizing childhood, we continue to promote participatory proposals where the youngest volunteers from the Heritage Cities will be the main protagonists of collective choreographic projects and one more year the artistic programming will be accompanied by free open workshops taught by the guest artists themselves on the same day of the performance as part of the #VivePatrimonio section of the Heritage Night.

Likewise, we renew the collaboration agreement with FECED- Dance from Spain and the Academy of Performing Arts of Spain and this year we will present the second volume of the «History of contemporary dance in Spain».

The creators and the exceptional heritage spaces chosen as settings for ESCENA PATRIMONIO will be Sara Cano in the Plaza Cervantes in Alcalá de Henares, Maduixa in the Corralón de Carmen Pedrosa of Ávila, Luz Arcas in the Palacio de Jabalquinto of Baeza, Du’K’To in the Plaza de las Veletas of Cáceres, Leonor Leal in the Sala Orive in Córdoba, Taiat Dansa in the esplanade of the Teatro Auditorio of Cuenca, Paula Quintana in the Baluarte de Santa Catalina in Ibiza, Daniel Abreu in the Temple of Diana de Mérida, Iker Gómez in the convent of the Plaza de San Esteban in Salamanca, Álvaro Murillo in the Teatro Leal de San Cristobal La Laguna, Aida Colmenero Diaz in the Museo do Pobo Galego in Santiago de Compostela, Guillermo Weickert in the Royal Mint from Segovia, Lali Ayguadéin the Plaza del Fòrum in Tarragona, Sara Calero in the Hospital de Tavera in Toledo and a sound choreography by Luis Miguel Cobo for the ruins of San Lorenzo de Úbeda.

With these first steps we invite all citizens and visitors of the 15 Cities to dance with us on September 12 in the street or from home to the rhythm of interaction, creativity, discovery and approach to artistic creation to everyone.